Can't Have Nuttin' Nice if You're Living a Real Mama Life

My mom's (or should I say 'Momma') family is all from the Southern US.  I have a gaggle of aunts, uncles and cousins strewn about North & South Carolina, Georgia and Florida.  You might remember me mentioning our house in the mountains of NC here, here, and here.

One summer when I was about 11 the family sat on the long wrap around porch admiring my uncle Wray's new truck.  It was a big deal because it was his first brand new vehicle. This truck was the symbol of a lot of hard work.  Uncle Wray had started his own company years back and was just starting to reap some reward from all his hard work. It was heavily kitted out with all the extras.  I remember, even at 11, being rather in awe of this fancy truck. We walked down to the drive way to have a closer look and rub it with a diaper (I am totally sort of kidding)  While doing a turn around the truck I noticed a sizable scratch on the back bumper.

(read with your best in your head southern accent) "I don't even know, happened in the parking lot while I was in the store."  Shaking his head "Can't have nuttin' nice"

Even at the time I could relate.  Only a few years earlier my cousin Noah had broken my newly opened Barbie Bubbling Spa on Christmas morning.  I had barely had a chance to play with it when he broke the mechanism that made the bubbles.  My dad did fix it but had to crack open the back leaving it less than perfect.  I got closer to forgiving Noah after I punctured numerous hole in his new bongo drums with the Christmas nut pick but I never fully did and still carry a grudge to this day.

Really some of the worst damage to my 'stuff' has been done by pets.  This use to be a beautiful couch.  I had it professionally reupholstered about 7 years ago with a beautiful linen I found on sale.  Within 6 months of it being covered our dog barfed on it during the night.  By the time it got cleaned up the next morning the barf had bleached a lighter spot into the fabric.  Nothing that couldn't be fixed by flipping the cushions over but nothing could fix the damage the cat unleashed. 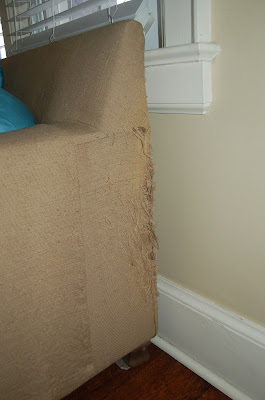 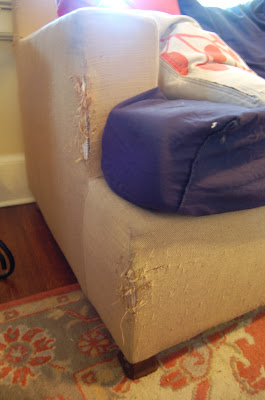 Then the kids took their toll - Spit up, barf, spilled drinks, dirty hands, dropped crayons.  Those poor cushion covers were getting more than their fair share of getting washed.  It wasn't long into the sleep deprived world of twins before Big Daddy accidentally put the covers in the dryer shrinking them to the size of doll house slip covers.  It was at this point that we gave up completely and bought a sheet and some large pillows, completely replacing the back cushions and covering the seat cushions. The one nice thing about this conclusion was that we could colour code the couch to the season - blue base and blue and orange pillows for fall and winter and a taupe and pale blue combo in the spring summer   It helped make it tolerable until a new couch could be budgeted.  But then this happened 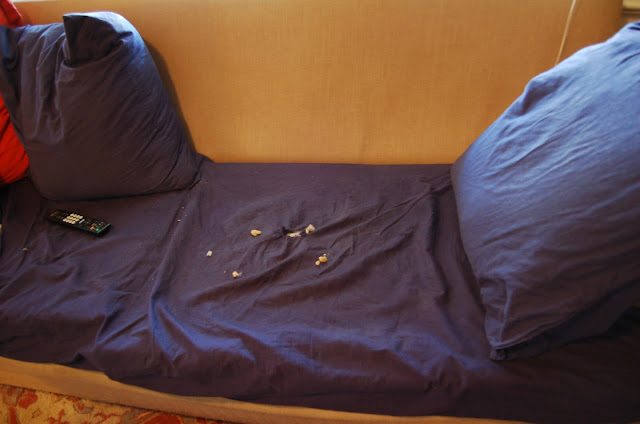 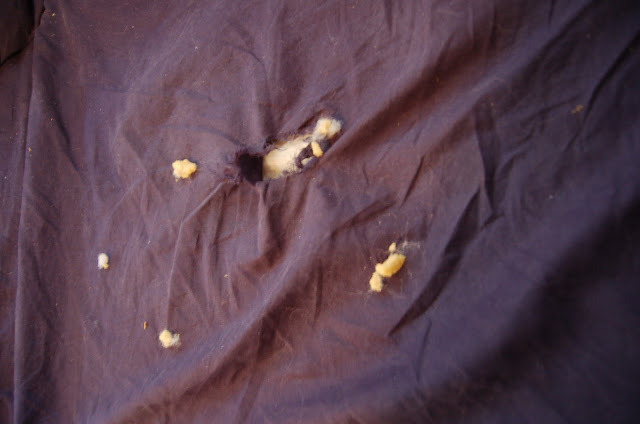 This is our old dog's new trick and has taught us that until we are empty nesters we can't even have something that is vaguely nice.  This is a Real Mama Life
Posted by Emily Grace at 13:20