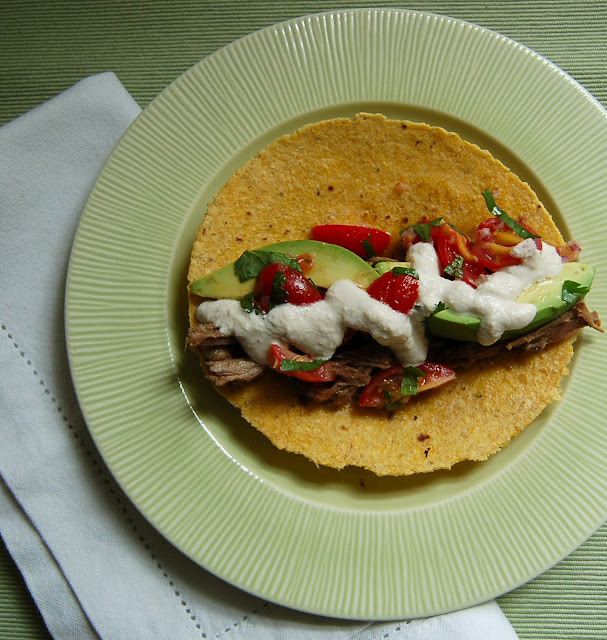 Every once and a while there is a recipe I work on that makes me happy right down to my toes.  One that classically has gluten and dairy but doesn't leave me feeling like it might have been better if I could eat gluten and dairy.  That it is perfect and delicious just the way it is.  This is that recipe.  Sure there are versions fulled with cheese, sour cream and flour tortillas but it doesn't matter because I think I would still choose this version.

This is actually the combination of a few recipes I have been working on.  One is for a gluten free pulled pork....seems easy enough right?.....problem is, I seem to have a real preference for pulled pork cooked in a beer braise and almost all gluten free beer is terrible!!  It has never really bothered me because I am not, nor ever have been, much of a beer drinker but it is these small inconveniences, when the lack of good gluten free beer wrecks a favourite recipe, that frustrates me more than any other restriction.

During the Gluten Free Garage a couple of months ago I met Parda who is a beer and wine distributor who specializes in organic and gluten free.  He told me that he had a gluten free beer that was good and promised to send me some.......and than followed through and sent it!!

So not only did we try it but more importantly, I cooked with it.......


Now as far as drinking goes......it tasted like beer to me.....which is a good thing, but about as complex a review as I can give.  Big Daddy, who is a pretty avid beer drinker tried it and did say it was the best gluten free beer he has ever had. Parda at The Healthy Wine Agent tells me it is 100% gluten-free, made with organic millet malt and it is not made with any glucose, rice syrup or sugar like some of the other gluten-free products the LCBO carries.  Even more reasons to like it!!  The best part of this beer....it made really good pulled pork!!

Prepare the spice blend, mixing the salt, chili powder and cinnamon together.

Coat the pork in a little of the oil and rub with the spice blend.  Let rest for 30 minutes or over night in the fridge

Heat the remaining oil in a large dutch oven over med-high.  Brown the pork on all sides. Remove and set to the side (or into your slow cooker if you are using one).  Remove excess fat.

Increase heat back to med-high and add the beer bring it to a boil.  If you are using a slow cooker, pour this over the pork, cover and let cook. If you are cooking this in the oven, add the pork back into the pan, cover and transfer to the oven.

Cook until pork is tender and falls apart - 3-4 hours

Strain the liquid from the pork and skim the excess fat.  Shred the pork, add back to the liquid and add the vinegar.  Serve on a gluten free corn tortilla with avocado slices, Pico de Gallo and dairy free Sour Cream and tell me you miss gluten and dairy 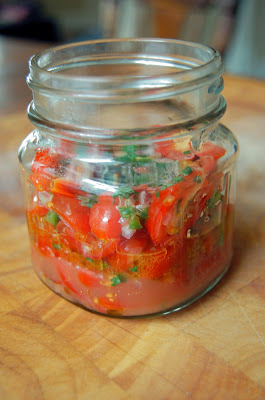 Combine ingredients in a bowl.  Add more lime juice or salt if needed

***Want to order some beer from The Healthy Wine Agent?  Contact Parda at sales@thehealthywineagent.com
Posted by Emily Grace at 18:09