This road to recovery is so much longer than I anticipated.  I thought when I was diagnosed with Hashimoto's Disease that it meant my health issues were solved.  That finally they would have a path and a treatment plan for my on-going symptoms.  It is almost 5 years later (since the diagnoses) and I am still dealing with the endless barrage of symptoms. Still dealing with days that I am so physically, emotionally and intellectually exhausted that getting anything done is out of the question. The doctors say that on the days that I have energy I should rest too.  Letting my adrenal glands heal, letting my body 'right' itself and rest - yeah right...I have 2 five year olds.  I have a hard time with the feeling of accomplishing nothing.  If I don't get something done during the day I can't sleep that night -  a long list of 'to dos' haunting me, hanging over my head, tension rising.  I can feel my adrenals dumping adrenalin, I start getting 'restless legs', my brain swirling, my hands in tights fists.

There is something about being a stay-at-home mom or work-at-home mom that makes me feel pressure to prove my days accomplishments. When Big Daddy gets home from work if he can't physically see what I have done I feel the over-whelming need to tell him. Proving my worth? None of this is pressure that he has put on me.  The only thing that ever annoys him is if dinner isn't made but this is totally motivated by his stomach not his judgement of me. And the kids start getting whiny if they don't eat dinner as close to 6 as possible.

Days when I get things done (even just writing) I feel better about myself.  I feel prettier, skinnier......more desirable.....weird? I feel like I have contributed to the forward motion of my life, the family, the day......maybe the universe!......On the days when nothing, or very little is done, I feel it is a day wasted.  The day rolled over me like a train and passes me by. It is a day further behind from where we should be......

Maybe that's the bigger issue....that we all feel like we 'should be' further along in life....ah, North American society pressures....why aren't we kinder to ourselves?

I am still reeling from the adjustment of cutting dairy out of my diet.  I know it seems inconsequential, especially in the quantities that I ate it and I really shouldn't be having such issues but major dietary restrictions when you're feeding not just yourself but your whole family and have the job of recipe developer....it changes everything not just the food on your plate.

I am starting to see a bit of light.  I solved my morning coffee issue.  A small victory but sets the mood for the rest of the day. I tried the coconut coffee 'creamer' that the health food stores sell.......have you seen the list of crap in the ingredients?? It wasn't even very nice.....making my 1 to 1 1/2 cups of coffee a day a sad reminder of what I would spend the day missing.  Not only that, it was expensive!! I looked up some homemade alternative recipes and tried a few.......meh...and usually heavy on the 'favoured coffee creamer' idea which I don't like.

I really wanted to stick to a coconut based replacement for the half and half and not resort to soy which really is the most available alternative out there (soy isn't so good for you) But after having some truly disappointing mornings I trekked out to our local Asian Supermarket (T & T Supermarket) and found some cans of coconut milk that are a higher percentage of cream (70%) than the standard can (60%) and I have been using that for the last couple of days.  It isn't as coconutty tasting as you would think and it has that nice rich creamy texture.  After opening a can I have been pouring the contents of the can into a mason jar to store.  The only draw back I have found is that the higher fat coconut milk gets quite thick in the fridge so I been adding about 1/2 cup of regular fat % coconut milk for every can of the higher fat.  This gives me about 750ml of coffee 'cream' per batch.  The cans are $1.99 each regular price but frequently go on sale so it ends up being about the same price as buying crap free cream and cheaper than organic cream. So win win that it might have made coffee drinking a little cheaper for me. 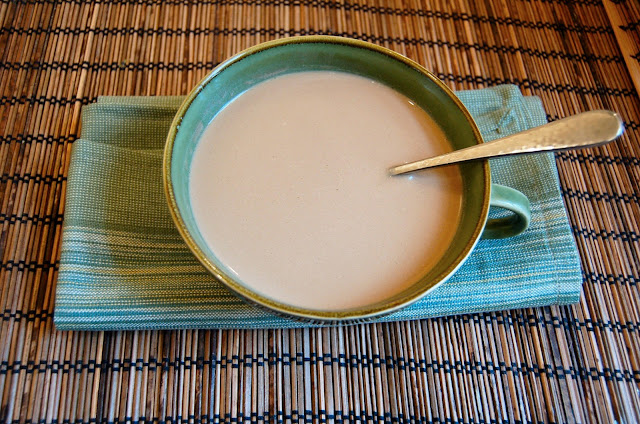 **one word of warning, make sure when buying coconut milk that the list of ingredients is Coconut Extract and Water ONLY.