About 2 weeks after giving up gluten the cold went away and the frequency that I got sick was like any other healthy human...... for about a year.  I had one cold that lasted a few days.

In North America we are having a brutal flu season.  Even the vaccine manufacturers are coming out and admitting that they are having a very low success rate this year (*epic eye roll*) I refuse to spend another moment of my life sick.  So after finishing the antibiotics I went on the assault.  I have been dosing myself heavily with probiotics to rebuild my gut after the drugs.  I brewed a huge batch of Kombucha (which is still fermenting) to start drinking regularly again, I ordered Fermented Cod Liver Oil/Butter Oil combo and I made Elderberry Syrup AND I cut dairy.  Over reaction?  All of these things are so beneficial to my (or anyone's) general health that I really should be doing them all the time regardless of the flu season.

So before I get to the recipe, for those of you that don't know about Elderberries 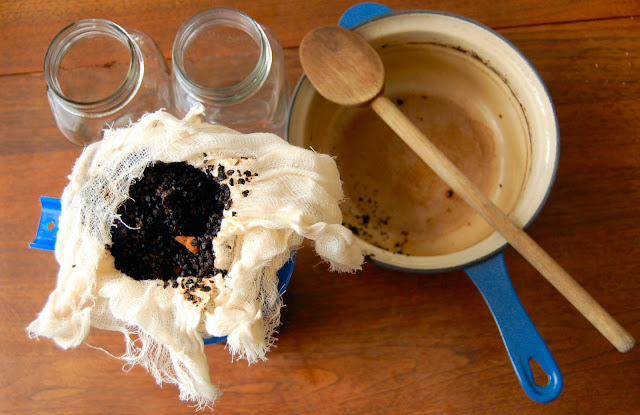 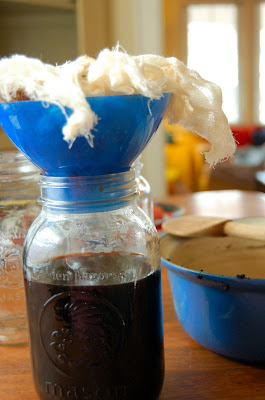 Bring the elderberries and water to a boil (include ginger if using), turn down and let simmer for 30 minutes or until the liquid has cooked down to half.

Turn off the heat and let cool to luke warm then add the honey.  If you don't let it cool the heat will kill all the beneficial enzymes in the raw honey (which help fight virus' as well)

Strain the juice into a mason jar, pressing all the juice out of the berries to get all the benefits out.

Refrigerate.  Can be kept in the fridge for up to 6 months.  If you are wondering what it tastes like, to me it tastes like water that had raisins soaking in it.  It isn't a strong or unpleasant taste.  The kids like it