Chicken Marbella with a Twist 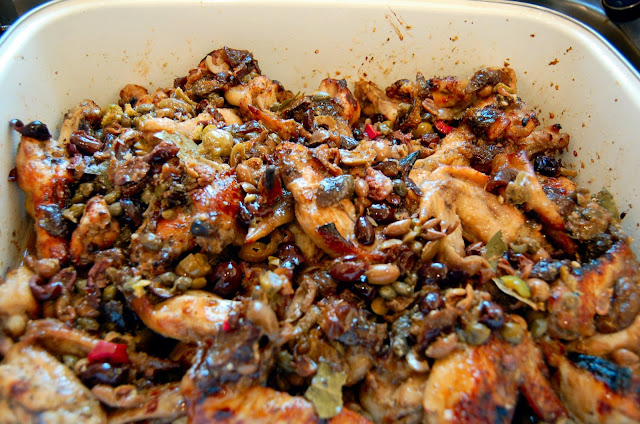 I have started to attempt to add small scale catering to my resume.  Crazy I know but with everything else that I am doing it makes some sense. And in truth, I have had some requests.

So I thought I would try it.  I am probably more stupid than brave but then you are here reading about it......sooooo I win!.

I needed to pulled off finger food for 20-22 people, Tapas style.  One of the dishes that I thought would go over well was Chicken Marbella.  I love the flavour profile of this dish, it has Spanish roots and if I am organized far enough in advance I make a point of making it.....so not very often.

Now the classic recipe for this dish is the one from The Silver Palate Cook Book. I have one complaint about this recipe.  I find it produces the the worst kind of chicken skin.  Soft, fatty and thick with dimples - like it has been boiled. Now the original recipe calls for using 10 lbs of chicken......because it is so good you are going to want leftovers....made with broken down whole chickens. But I needed to make more than that and it had to be finger food so I wanted to use wings only.

I knew the fatty skin aspect would only be emphasized by using wings.......and what is worse than chicken wings that have a skin that feels uncooked?  I also tend to enjoy the sauce so much (like spooning off other peoples plates so much) that I felt it needed more. 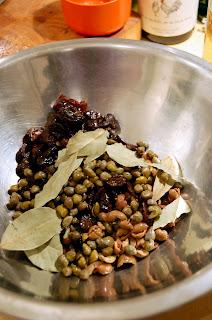 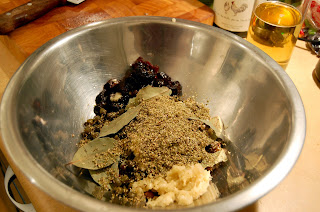 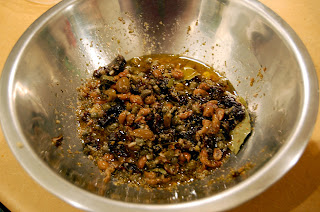 Preheat your broiler on HI. Arrange the chicken in a single layer in a large baking pan (I used a large roasting pan I have), trying to avoid the caper, olives, prunes and bay leaves, leaving them in the marinade bowl.  Crisp up the wings under the broiler.  Don't let them burn but it is ok if the tip of the wing blackens a little.  Turn to brown other side.  Then remove from oven.  Turn off the broiler and preheat oven to 350. The wings don't need to be cooked through at this point, it just to crisp up the skin. 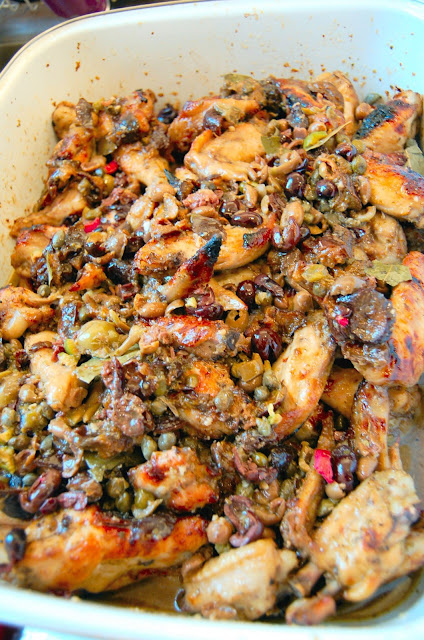 Pour the marinade evenly over the chicken. Sprinkle with the brown sugar and pour the white wine in around the pan.  Bake for 30-40 minutes, basting frequently with pan juices.

When you take it out it is done but it only improves with flavour the longer the chicken sits in the marinade.  Top with parsley or cilantro. I made this the day before the party and reheated it at the party.  It is also delicious at room temp.

**I know I say that this site is gluten free, sugar free and crap free.  And I do stick to my guns on that one.  This is one of the few recipes that I will post that has any sugar in it.  Get a high quality brown sugar or unrefined cane sugar.  In this rare case I don't recommend a replacement.  The pure sweet and ability to caramelize is why real sugar is indispensable this time.  There is also a case to be made for the fact that it is being consumed with a fatty protein therefore greatly slowing the sugars ability to raise your blood sugar.
Posted by Emily Grace at 17:13