What I am up to and Roasted Tomatoes

I have been 'Up to' too many things.  Recipe development, Parent Council business, my own research, catching up on columns for other publications, planning the twins birthday party and preparing for my 5 day trip to New York (more on that later) So busy with so many big things that I am being pulled in a million different directions at the same time.  So steep a learning curve in so many different areas that I am actually feeling brain dead at the end of the day.

This has all been exacerbated by the fact that I have been busy finishing up my tomato canning for the year.  3 bushels (150lbs) so far.  I say so far because I may buy another 1/2 bushel for roasting and canning.  I can't believe how completely obsessed I am with roasted tomatoes. It has been such an intense love affair that I have been going out of my way to cook dinners that involve the use of them. 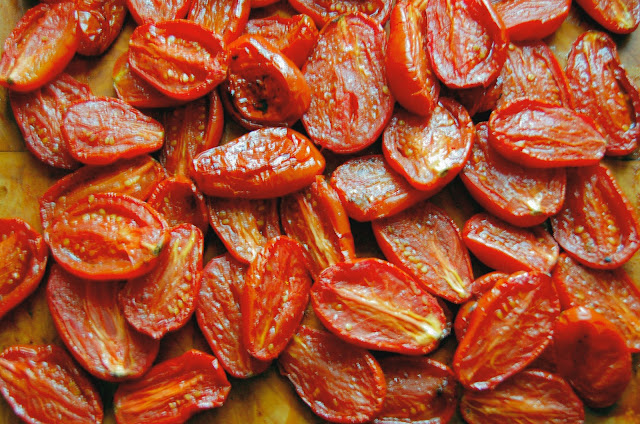 I canned 1 1/2 bushels of peeled and slightly chopped tomatoes, used 1/2 a bushel to make a years worth of ketchup (recipe to be posted soon) and roasted another bushel that I made pasta sauce with and canned that......and then preceded to eat 1/2 of it this week........we don't generally eat pasta that often but with my current schedule some nights it has been impossible to make an alternate healthy dinner.  It also makes it easy for Big Daddy to throw a healthy home made dinner together if there is a beautiful home made sauce ready. 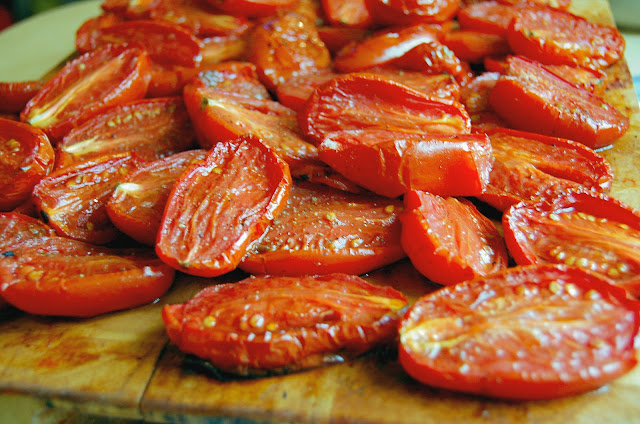 Pre-heat oven to 350. Wash tomatoes and cut them in half. Pile your now halved tomatoes in the middle of a parchment or silpat lined cookie sheet. Drizzle oil over the pile and sprinkle with coarse salt and freshly ground pepper.  Toss and then lay them out cut side up.  Don't pack them tightly. Roast in the oven for 45 mins to an hour depending the the size of the tomatoes.  They will grow richer in colour, the skins will wrinkle and the bottoms will brown a little. Let them cool for about 20 minutes before handling.  You could send them through a food mill now but I don't have one and I actually love slipping my thumbs under the skin and 'releasing the tomato from the skins' (said with your best Julia Child accent).  Use this to make a rich amazing sauce.

In my testing I have been trying out other developers recipes.  I have had a real interest lately in the Paleo diet and have been reading quite a bit about it.  I not only find diets in general fascinating but Paleo is a Gluten free/real food friendly way of food so it opens my eyes to a million more recipe ideas and ways of looking at meals.  That and it is a incredible healthy way to eat.  I found this food blogger

And then my head exploded.  I thought I was doing a good or at least interesting job at eating well with my food restrictions but this woman blows my mind.  Even with the numerous foods she is unable to eat, from her recipes I am not sure she ever feels deprived.  I don't think I would notice the missing but common items with meals like these.  I tried her grain free waffles recipe. 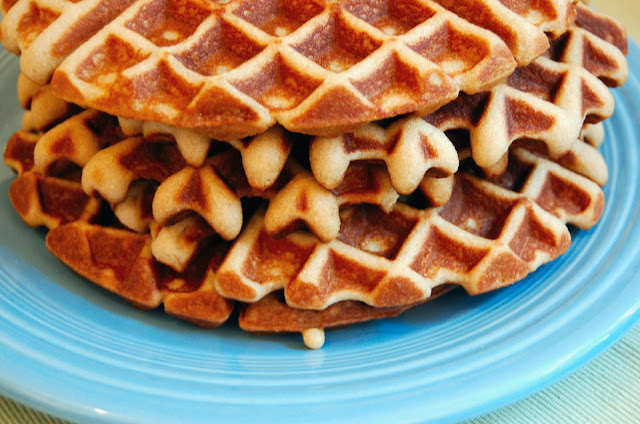 And whatever part of my head that hadn't already exploded enough....exploded!!! And I flew into a jealous rage of "How dare she?", "How can she?" and "I'm not good enough"'s. And had a temper tantrum. Then I insisted that Big Daddy feed me the rest of my waffle while I lay on the floor feeling sorry for myself (see why I am so exhausted?)  I highly recommend checking her out and I plan on eating more of these waffles. Thanks Danielle!! 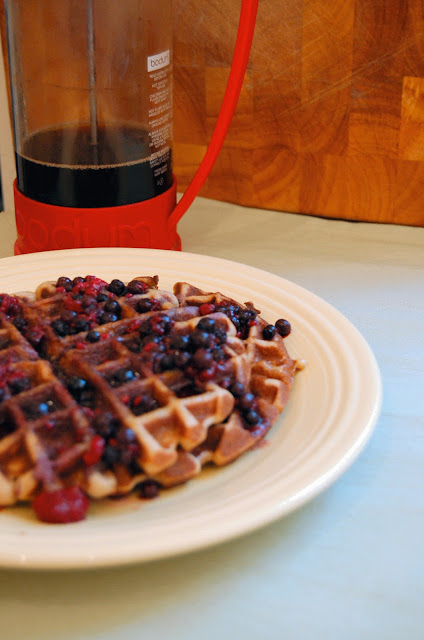 I also finished preserving some hot peppers and have more about to ripen.  I packed them in oil and I will keep them in the fridge. 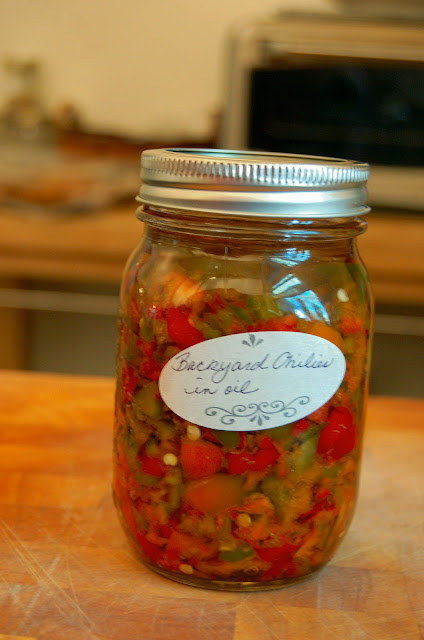 Its been a big week really
Posted by Emily Grace at 21:16