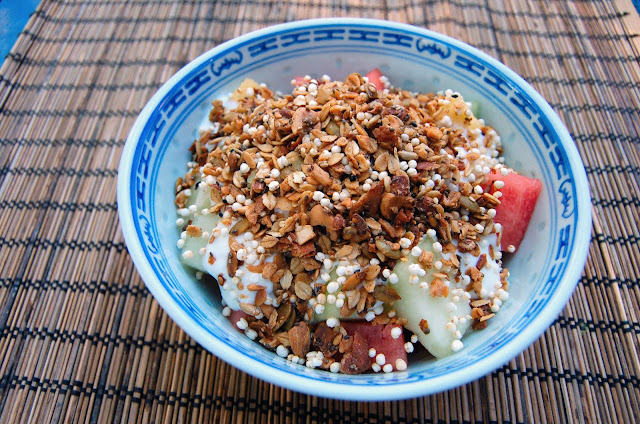 I have been slowly reading and 'digesting' (see what I did there?) more and more of Wheat Belly and the concepts behind the Paleo Diet, GAPS diet (Gut and Psychology Syndrome) and SCD (Specific Carbohydrate Diet).  The need to go gluten free first opened my eyes to diets beyond Atkins and low-cal to ones that cut certain carbs, only eat raw foods, traditional foods, etc. It has been a steep learning curve and has made my gluten-free-ness seem simple and completely do-able. I haven't found that I need to be anything but gluten free (so far) but the more I learn, the more I feel it important from a health stand point to 'ungrain' us a little bit.  It is engrained (see I did it again!) in part of our North American culture and diet, part of our food pyramid, part of our lifestyle to think that grains need to be a major player on our plates. More and more recent studies have shown this to be absolutely untrue, and in fact, not only has the human race's digestion not evolved fast enough to keep up with the industrialization of grain farming but with the now over processing of the huge quantities of grain that are force into our diets, we just keep getting sicker and fatter. I spoke to that a couple of weeks ago with 'How Healthy is your Healthy Diet?'

I have no plans on going completely grain free, at this point, but what if we only ate about 50% of the grain that we generally consume?  I can only assume the further into learning about this I get, the lower I will want that percentage to be, but for now getting down to 50% doesn't seem impossible.

I have posted a granola recipe in the past and I stand behind it.  In fact my low grain version is based on the same concept of 10 cups of dry ingredients with coconut oil and maple syrup cooked at a low roast.  If there is an ingredient you aren't particularly fond of just up one of the seeds you like more.

Prepare the same way as previous granola recipe adding the puffed quinoa as you would dried fruit.  With this granola I haven't been adding dried fruit and eating it with fruit salad and some yogurt.  We all lerv this and eat it for breakfast and snacks.