When vacations aren't a vacation

Our family holiday officially went to hell.... It was all too good to be true. Friends coming to stay, two sets of grandparents, cousins galore....too good to be true is right.... Slowly everyone started to cancel including one set of grandparents but we pushed ahead...looking forward to a relaxing holiday. Getting organized and ready to leave was pretty seamless. Even packing for 3 (Big Daddy can pack himself) went fairly smoothly. No the house wasn't as clean as we would've liked to have left it but oh well....we were on holiday! With house sitters and cat sitters all lined up we hit the road early Thursday morning. The kids were traveling like a dream!! No screaming, complaining or fussing about being trapped in the car. Everyone was in good spirits.

The first day of driving flew by and we got much further than we thought we would, probably thanks to leaving so early. Our second day would only be a few hours and we would be there by noon...just in time for lunch.

The area we were in was dealing with a huge heat wave.  This is an area in the North Carolina mountains so it gets hot during the day but cools down to a really comfortable sleeping weather.  Not this year.  That first night I slept with the kids.  They were a little freaked out and Bea came down after about 15 minutes so I curled up with her. I 'accidentally' fell asleep.  The next morning I slept in.  I woke to the sound of the kids laughing, screen doors springing shut and the smell of coffee.  I slipped down stairs, grabbed a cup of coffee and sat on one of our wrap around porches.  Bea was playing with Papa and Big Daddy and Gabe were out behind the house trying to blaze a new trail on our property.  We had big plans for the day.  It was Coon Dog Day.  A local silly, but taken very seriously, day of celebration.  We were going with some cousins to the parade and then a good friend was arriving close to dinner time to stay with us for a week.  It was going to be a good day...and it was!  Dinner was a family affair with 4 generations of cousins, grandparents and friends.

The next morning Big Daddy and the visiting friend took the kids on a hike while I ran some grocery errands with my parents.  It was during this hike that Big Daddy become aware that he had probably been exposed to poison ivy.  By the end of the day we knew there was a problem.  The next day we were at the hospital. 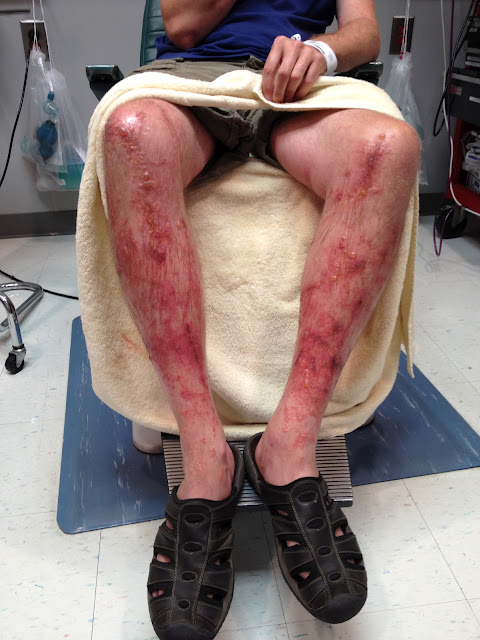 These are all blisters.  Blisters that were leaking so badly it was creating puddles on the floor.  During the 4 hours wait in an almost dead hospital ER this had spread up one arm and on to his ribs.  And it just kept getting worse - by the next morning his legs up to mid thigh had swollen so badly that he couldn't bend his knees.  The doctors on duty said it was the worse they had ever seen. He was prescribed a heavy dose of steroids.  21 days worth of them.  He was also pretty much stuck in bed, for what we were warned, the rest of our vacation.  This all happened within the first 3 days of our holiday, the same day the heat wave broke and rain clouds rolled in for what was forecast as heavy thunder showers for the next 10 days.

We are home now, many days early so we could heal and recoop and maybe try again later in the summer for a real family vacation....one that we can relax for...but knowing my life...I'm not counting on anything ever going that smoothly.
Posted by Emily Grace at 00:50