Embarrassingly I have been watching quite a bit of Rachael Ray lately. I have gone so far as to PVR the show. I loathe to even admit it because if you have the same visceral response to her as I do you might accidentally punch me in the face when I say that. Truth is she has been on a real Spanish come Mexican kick lately and I am kinda obsessed with that food right now. Yes her voice makes me want to take a nut pick to my ears and I'd die a little every time she sycophantically said to a guest 'oh my gawd I love you' or over enthusiastically said 'yum-o' if I hadn't already turned it into a drinking game.  The kids are at school, breakfast warming in the oven, tequila and shot glass in hand........wait...

So I am stealing recipes finding inspiration in what she is making and making it my own - using only real food and making it kid friendly.

This was dinner last night 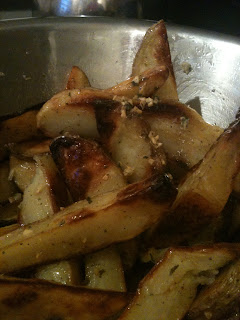 Toss potato wedges in a bowl with olive oil and a liberal amount of salt and pepper until lightly coated.  Arrange on a baking sheet and roast in a 425 oven for 40-45 minutes, until golden and crisp, turning once. When the fries are done, melt the butter in a small pan over medium heat until it foams. Add the chopped garlic and swirl it around for a minute or two to infuse the butter. Toss the fries in large bowl with the garlic, butter, and parsley.

Heat a large, cast iron skillet or other ovenproof pan on the stovetop over medium-high heat. In the EVOO, brown the chicken pieces on both sides; then remove to a plate. Add the onion, garlic and the sweet and hot peppers to the skillet and season with salt and pepper. Sprinkle with thyme. Add the chicken back to the pan and transfer to the oven to continue cooking for 20-30 minutes (depending on the size of the cuts you used), until the juices run clear. Remove the chicken and let it cool for a couple of minutes then pull the meat away from the bones with two forks. Return the now cut up or shredded chicken back to the skillet. Douse the pan with lemon juice, garnish with parsley and serve with the fries and a salad. 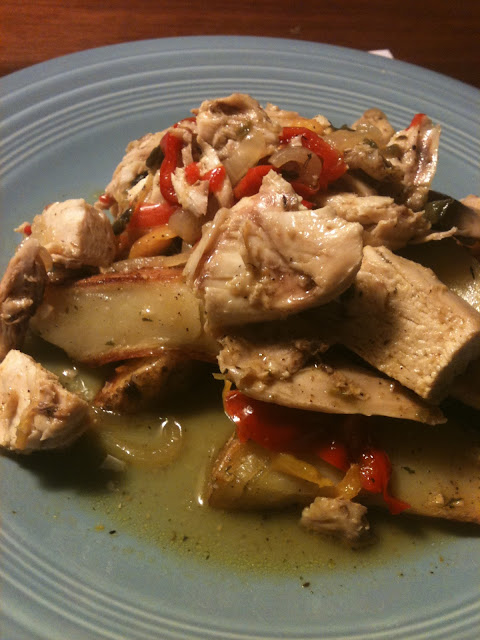 This meal was super easy, very little prep and a very easy clean up even if you are totally hung over from 10 am drinking games. And most importantly the kids loved it.
Posted by Emily Grace at 21:51