My daughter has been asking many "pardon"s, "What's you say?", and "What?"s lately.  She has also said many "I can't hear you" which has me concerned.

I am not to the point of actually worrying if there is something wrong with her hearing.  They did test her hearing when she was born and they had no concerns but that does not mean there can't possibly be something going on now......but before freaking out and expecting the worst we are going to clean out her ears. I have been previously told by a doctor that her ears are very waxy and with the number of head colds, one that involved some screaming that her ear hurt, they have had this winter it would surprise me if her ears are just 'full'

I have always read the best way to clean out your ears is to let the hot shower water run into them while gently pulling down on your earlobe.  This allows the warm water to melt and rinse anything away without actually putting something in your ear-- don't put things like q-tips in your ears!!... really really bad.

Another way, especially if you have wax issue, which is what I think Bea has, and you are 4 years old and never going to let warm shower water go in your ear-- is oil.  I remember my mom putting slightly warmed oil in my ear if it hurt when I was a child and it always helped.....thinking back I think it was baby oil, which is full of fragrance and probably a terrible thing to put in your ear but at the time it helped!


So I made Miss Bea some garlic ear oil.  You can buy the stuff at health food shop dispensaries but they cost a fortune and you never know if it is organic (both the garlic and the oil).....and I think the fresher the garlic the better as far as anti-bacterial properties. 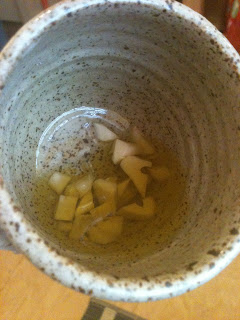 I took one large clove of fresh organic garlic (I can not stress enough how important it is that you use local organic garlic. The grocery store sells garlic that is heavy in pesticides and herbicides and then imported from CHINA!! Not only do you not want to pour that crap into your kids ears but you also are going to environmental karmic hell...rant over) diced it up and put it in a small ceramic cup....I don't recommend putting it through a garlic press only because you have to strain this later and it is really difficult to do so when it is so fine.  I added 2-3 tbsps of organic olive oil.  Cover and set aside over night.  Do not refrigerate. The next day, strain and put in a dropper bottle.  You can recycle a dropper bottle from a previous medicine or you can buy one like I used for a couple of dollars 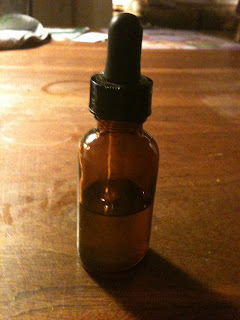 The next morning you will be amazed how much waxy yuck has come out of their ears. Clean the OUTSIDE of the ear with a q-tip.  You may want to do it 3 or 4 nights in a row.

Do NOT do this if your child has had a perforated ear drum or has had tubes put in their ears!!!

We use this remedy as well and my husband even does it when he feels a cold coming on as he is prone to ear infections and swears by garlic oil in the ear!!