I have a bunch of half written 'draft' posts I haven't had time to get to.  I am MIA due to a chicken pox outbreak.  On Thursday the school sent home a letter of warning.  Public Health had received notice of a possible case of Chicken Pox in the twins' school.  The same day, they sent Miss Bea home early with about 6 spots on her back.   They looked like bug bites but as the day progressed she started getting a fever and then started vomiting, not often but about every 8-12 hours. We are now on day three of home sick kids.  Bea seems to have a true case of them and other than the vomiting has a pretty classic case for her age group but Gabe has only really had a fever and chesty wet cough.  Gabe's fever is now gone and Bea's is just a low grade today although yesterday she got pretty hot.  She hasn't been eating but taking fluids.  I am packing them full of Grapefruit Seed extract, vitamin D, vitamin C and sleep.  I am hoping the worst of it is over.

I really thought that getting chicken pox would be more difficult.  I mean getting the kids them, not having them, and I would actively have to seek it out.  One month into school and here we are.  I was also pleasantly surprised what a casual approach the city and school board have taken.  I thought that like most virus' that Big Pharma have tried to get 'disease designation' there would be more of an uproar or fuss.  Parents seemed to be meeting my expectations of 'outraged' when the rumours started on Tuesday blaming parents that don't vaccinate for CP but the school doesn't even have a policy of sending the kids home unless they are too sick to be there.  The send home said:


"Staying home from school or daycare is not necessary if a child feels well enough. The Canadian Paediatric Society recommends that a child with mild chicken pox who is able to participate normally in all activities should be allowed to return to school even if they still have a rash. Chicken pox is most contagious one to two days through coughing and sneezing before the rash appears. It is usually too late to prevent exposure to classmates and teachers"


I really appreciate the lack of fear mongering here.  It was a nice surprise.  I just hope that parents have the same reaction now that the letter has gone out.....I have yet to see them since the outbreak and not at all since my kids got them!! 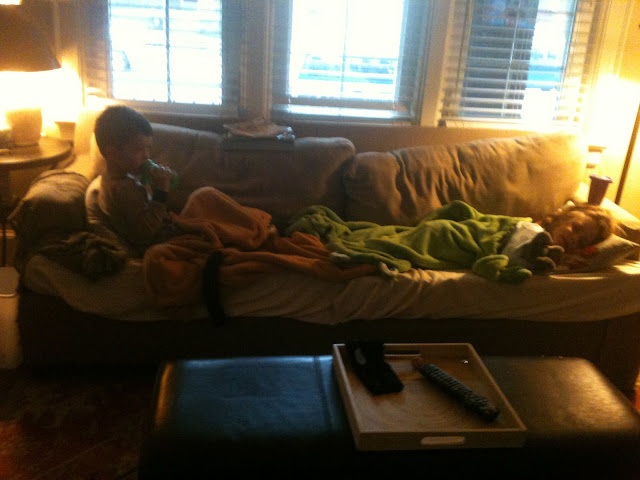 I was also forwarded this interesting study about CP and death in children.  This study shows that the deaths are actually from a drug reaction/interaction or complications from Chicken Pox not from the pox themselves. The conclusion is that if the parents had chosen to do nothing and let the CP ride it's course then these kids may not have died.  That is a scary prospect!!
Posted by Emily Grace at 10:01