This summer when we headed down south I was sad to find out that the terrible US economy had claimed the life of Walden Books.  Originally it's own chain but then sold to Walmart who merge it with Borders and now it is gone....

I always really liked Walden Books.  There was one in the mall my grandmother would go to often and I would sometimes hang out in Walden while she picked something up in Belks or the like.  They were smaller stores and you would get to know the people that worked there.  They kept me well stocked in Sweet Valley High books in my Tween years.

Anyway I have to admit that I reaped the rewards of this death.  I shopped there 3 times in the two weeks we were in North Carolina.  The closing sale prices were out of control, so much cheaper than you can imagine.....75% off something already 75% off......so it goes without saying that I went crazy in the cook book section.  I also picked up a few novels, like a new copy of the 7th and final book in the Harry Potter series which I lent to someone and never got back, but it was the prices on generally expensive cook books that made me squeal, and cry and more embarrassingly jump up and down in the store. 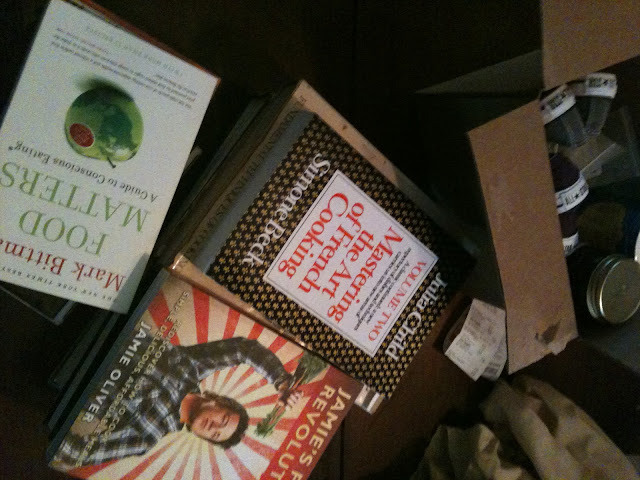 Here is some of the stash

I also took home a couple of cook books from our house there.  My grandfather was quite an amazing cook and like me collected cookbooks and recipes.  He was the one who got me interested in cooking and food in the first place by assigning me jobs in the kitchen while he cooked.  He made a beef stroganoff  that made me appreciate mushrooms....something I abhor to this day (who wants to eat something that has the texture of bug bodies?)  He got me to enjoy the flavour of them and now depending on the dish and if they are cook properly I love them (most people cook them wrong) The point is that he had the same love of food possibility that I have. The satisfaction that after a bad day you can come home a create something to feed and nourish your family.  Knowing that all those cook books on your walls are filled with the possibility of great night, great meals, happiness and love.

So I stole some of the 'possibilities' from our house there.....I am currently the only real foodie in the family that would truly appreciate them and I was reading them while I was down there and I wasn't quite done.  Besides a couple of them were being eaten by mice.....


I went through most of the books there....seeing if I could find a page that had some evidence of use. Some oil stain or food covered finger print.  I wanted to know which recipes my grandfather made, which ones he thought were good and worth making again.  It made me miss him again...knowing how much there was left to learn from him....how much there was to admire.  He was the one that created a strong sense of family in my family.  He was the glue.  He was the one who made sure that traditions were kept, celebrations were had and connections to far away cousins never lost.  And he would cook.  Grand meals for many many people.  And never simple stuff, he always made real meals that involved a lot of time and love.  I can only hope that my commitment to food and the feeling left from this commitment leave the same imprint that my grandfathers show of love did. I hope that it creates some glue and sense of strong family because my kids need that too