Oh and to be almost four!! 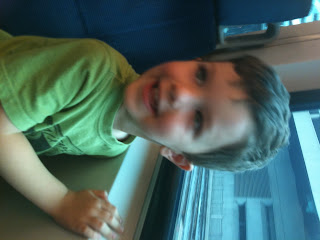 This month was full of major changes including starting school!  I knew I would never really be truly ready for this so I just made sure you guys were.  I also made sure that we had some really special Mama time before our full day together time ended.

One day I took you on a Go Train ride.  Just to Port Credit and back but you guys loved it.  I packed a little picnic lunch and we stayed in Port Credit for a couple of hours to play in one of their parks.  Gabe this is the look you had on your face for the entire train ride, there and back.  Bea you were more interested in the snacks and if there is a bathroom on the train (there is).  Gabe I was telling you how 'train engineers' drive the trains and you informed me that I was in fact wrong and that 'doctors and misters' drive the trains......I should tell Gampa Andy 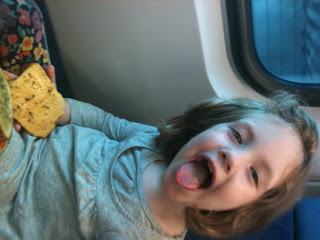 We also thought it would be nice to move you into big kid beds.  You have been in your toddler beds for the last year and a half and I think the super firm mattress wasn't feeling that cozy anymore for 40lbs turkeys.  We already had Bea's bed (my old one from when I was a kid) but I started to shop around for one for Gabe.  I really didn't want to just get you some Ikea crap that we will be replacing in a few years (thats right doctor Distructo) and then a friend reminded me to start looking at Kijiji and Craigs List.  I found one in a couple of days that I loved,  now we just needed a mattress.  I decided it was a good time to truly move you into your room.  I know it sounds crazy but until now I had your dresser down in the spare room because you guys did most of your changing downstairs and it made it easier for me.  We had also removed most of the furniture and all lamps, art and breakable items out of your room when you guys found freedom and climbed out of your cribs.  It wasn't long before you had broken almost everything in your room so we went down to the bare minimim.  Over the last year we had slowly introduced stuff back in but still no lamp and we had removed the bulb from the ceiling light (you guys either wouldn't go to sleep and just play with the light or if one of you woke up you would turn the light on waking the other).

But now you are almost 4 year old big kids and it is time to have a real room with some of your stuff in it.  Besides Daddy and I wanted to claim some grown up space back and have one corner of the house that we weren't falling over toys.

You guys are so easy going for these kinds of transitions.  There really is only excitment and no fear of change and I really think you are sleeping better. (I am in the midst of writing a 'before' and 'after', with pictures of this change as soon as the room is totally complete)


And then school started


You guys had some amazing opinions about school starting

-Gabe you told Daddy on the first day of school morning that you will probably need a beer when you get home from school today because "it's a big day".
-Then while waiting to go in Bea pointed to the school and asked me "Are you sure this is a good idea?"

I can't say that you had a great first day of school though - school was great and you guys loved it but then Bea got kicked in the eye in the school yard and Gabe came home and fell down the stairs.  Day 2 I took a little girl with a bit of a black eye and a little boy covered in bruises and a huge egg on his head to school.


Septembers weather was wonderful and we stayed after school everyday to play with your new friends and I got to know some of the other parents.  You guys being in school has done wonders for OUR social lives and I have made some great new freinds in the neighbourhood.  I am also glad that there are some other parents in the 'hood now looking out for you.

September is also Mummy and Daddy's wedding anniversary and Daddy surprised Mummy with a specail anniversary present.  He had sorted it all out that you two were going to spend the night at Uncle Terrys with Nokie and Cals because we were doing a wine tour in Niagara.  I wasn't sure how this would go over.  Sure you guys have slept at other houses but always with us and ususally with one of us putting you to bed but you guys had a blast!!! During the visit Nokie took video of Flora with Gabe. The lighting was low and it gave Flora creapy red eyes in the video. Nokie joked about a 'ghost dog' and Gabe added that she had 'blooding eyes'. The next week Miss Dover asked me what was going on at home that Gabe would be so obsessed with 'ghost dogs' and 'bleeding eyes'....Gabe, all your pictures at school had red eyes all week too.


September was also school photo day. I have to admit that I have been looking forward to this since you were born.  I have a real soft spot for school photos. And just when I didn't think I could love you more.....we got these (I made a point of asking Miss Dover to make sure to remind Gabe to 'use both eyes' so we wouldn't have crossed eye boy pix but it took the photographer about 15 tries and they gave them all to us) 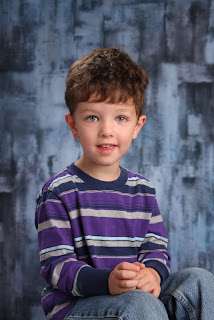 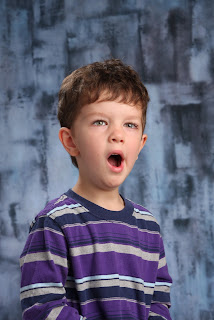 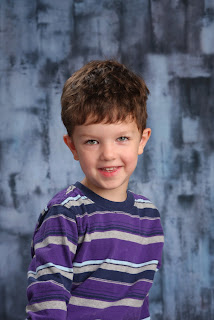 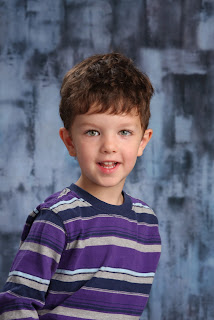 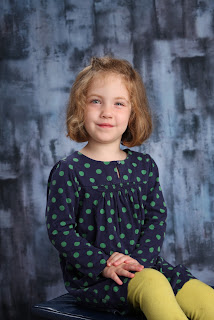 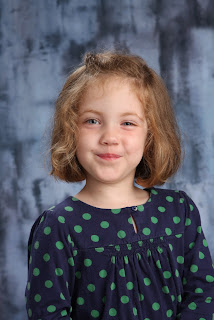 Bea got it right first try


Along with being the great loves of my life you guys make be proud everyday and for a myriad of crazy reasons.  The most when you stand out for being self possessed and have strong personalities.  I love that you both have some fire even if it is used against me sometimes.  This month you decided it was a good idea to strip naked, get filthy and take turns peeing in the backyard at precisely the busiest moment of the open house happening next door. I guess you agree that the house is outrageously over priced. This is the type of 'naughty' behaviour that I will never stifle. You only get to be young once and I want you to enjoy every moment of it.

How we are bad parents: Bea-"why is is raining?" Daddy "it's all part of the hydrological cycle", Me "because you made God sad and he is crying.

Gabe you told me you are going to teach me how to drive. When I asked 'how do you drive?' you said "You honk and push buttons and turn the steering wheel" Oh boy are you going to drive like your Daddy.


I love you guys more than I can say
Mama
Posted by Emily Grace at 22:07

aweee! I miss you guys! The kidlets are growing up so fast! Cant wait to see you's! <3