I love the combination of potatoes and eggs.  Because I don't eat toast....generally speaking...(being gluten free) I have become a bit of a potato whore when it comes to breakfast.

This morning I make Rosti. (I think there is suppose to be the double dots over the O but I don't know how to do that.)

Rosti is yummy and easy to make.  Unfortunately but also karmically the one time I take pictures of it is the messiest stupidist attempt I have had at making this.  So bare with the pictures....it still tasted great

You don't have to peel the potatoes but these ones had gotten a little eyed so they needed to be peeled.

Heat up a good size fry pan to a medium heat and add the oil.  Evenly spread it out like a pancake (depending on the size of your pan you may want to make two separate rostis, don't let your 'pancake' be thicker than 3/4 of an inch) 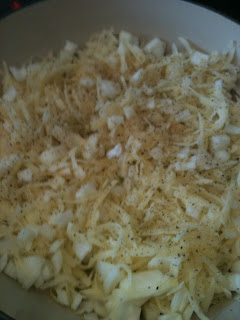 Let it cook for about 3 minutes so it starts to brown on the bottom then put the lid on the pan and let it cook for an additional 3 minutes.  Putting the lid on makes it steam a little letting the potato in the middle of the 'pancake' cook and retaining a little the moisture makes the 'pancake' lift easily from the pan.  My pan is very big so I could do it all at once BUT that being said I had to cut it down the middle to flip it
Do the same on the other side.  IF you find it is burning a little turn down the heat so that it doesn't brown so fast but still has the time to make sure the middle is cooked.

I LERV this with an over easy fried egg.  The runny yolk with the crispy slightly salt potatoes is heaven to me but it is also nice as the 'french fries' to go with a burger or with a beautifully roasted chicken and pan dripping......or just with a bit of sour cream (or yogurt) or just plain ol'ketchup.
Posted by Emily Grace at 15:33

Can you cook it with any type of oil? I'm allergic to coconut :(

Shonagh, Yes you can. I am not sure of what kind of allergy you have to coconut but if it is that coconut milk irritates your bowels (this is common which is why I bring it up) the oil doesn't have the same effect. If it is a severe allergy then just use a different oil or an oil and butter combination