I don't know where to begin to tell you the months that we have had. Why and how we have been so busy. What we have done and what you guys are doing. It has felt like a constant run to stay on top of all that we have had going on. 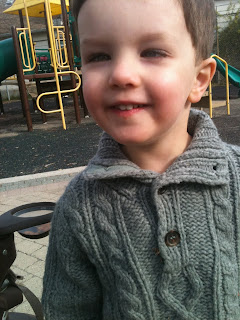 Winter really started in November after fairly extended fall weather. Not everyday but a few every week would be sunny and warm during the day and only cool as the sun went down. November came in like a lamb, shifting us to rain and cold and flu season. I have finally gotten my health under-control enough that I haven't been getting everything like I did last year.....a full year of a constant battle of fighting colds. I think I was sick more often than either of you. November gave you a cold, but December gave US pink eye!! Where we got it I don't know but once I admitted that we had it I was hearing about numerous cases from friends and other twins mommies. Luckily no one had it badly and it cleared up after a couple of days. I admit that we used anti-biotic drops (the first time either of you have EVER been on anything antibiotic) Both of you had bacterial pink eye which meant endless goopy and glued shut eyes while I had viral pink eye, which made my right eye look like a pool of blood and took longer to get over but didn't require any medication. 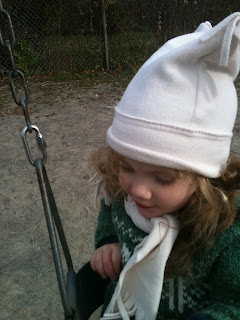 Maybe the pink eye came home from Sick Kids after Gabe's every 3 month check up. Again Gabe, you are doing fine but more and more obviously using only one eye at a time. At this point it still seems as though both eyes have perfect eye sight although it is hard test. You loose patience and get mad about all the fuss. This appointment was different because after meeting with the doctor and discussing what should happen next it was concluded that it is time for a surgical intervention. This is something that I have looked forward to and dreaded. It was discussed early that IF a surgical correction had to be made that it would be done before you started school so I knew the clock was ticking. It is a minor day surgery but you are my baby and it scares me. For it to be able to be done before school starts we had to switch doctors. Our doctor (Dr.Wong) doesn't have that many surgical days a month while one of the other doctors at the clinic is in surgery 4 of 5 days. So we made an appointment to meet with him. I didn't get to go to that appointment, I was in class and spent the appointment time on the phone with Daddy who was there with you. Grammy was at home with Bea. This new doctor only has a two month waiting list and we knew it would be done before we left the city. A few weeks later we got the notice that it was booked for February 10th.....and my stomach turned to knots.

November and December were particularly crazy months with me spending a portion of them in a Craniosacral class. Grammy came to town to stay home with you guys and I got use to coming home to the craziness of your day with her. I am always amazed how easy you both are with Daddy and I going out. There are very rarely tears. You will happily be left with Grammy, Grammy and Papa, Caley, and Meaghan and Jamie. In fact I wonder if you even notice that we are gone. 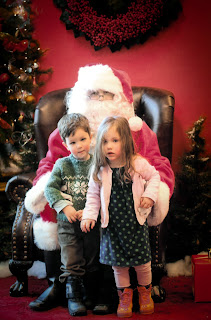 The end of November brought with it the beginnings of the Christmas season. Although we are trying to not get too caught up in the hubbub of consumerism/commercialism, we do want to get caught up in the magic and excitement for Santa. We thought that this year would be the first that you might have some interest in the Santa Claus Parade. Unfortunately it fell on one of the coldest days of the year. We got really bundled up and drove over to Dave, Henry and Elisha's (we didn't anticipate how crazy the traffic would be and it took us over an hour to get there) We were able to watch some of the parade and you both liked the Toy Story inspired float(but never saw Santa) before getting too cold and heading back to the condo for snacks and hot chocolate. A wonderful day that I don't think either of you connect with Christmas 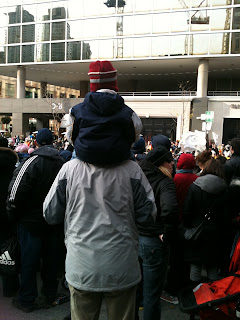 This December marked 3 years from your due date and the final Developmental check up. You both passed with flying colours scoring ahead on verbal and cognitive skills. They always give ideas on games or play that could help with what skills are to be learned next. Interestingly the next stage you both started doing within days of the appointment, Gabe even knows how to count down from 10!! Smartie-pants!! 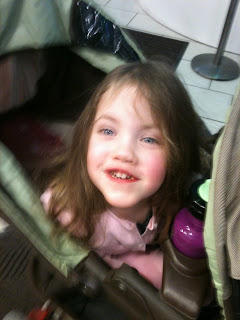 Language has recently included a strange assortment of words. Questions that were answered with "ok" are now answered with "sure". Plans we are making can be discussed with "maybe"s and "probably"s. You both seem to have some sense of time and will talk about "yes-der-day" and "to-mar-woah" although yesterday is sometimes what happened before naps. We have just recently entered the land of "why?" and
"why not?" and a couple of weeks in it is already driving me crazy and I know I have a lifetime of it to look forward to. 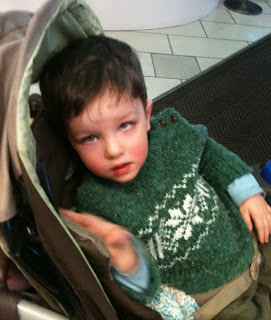 In November Daddy and I signed up for an evening Parenting without Anger class. It was offered through TPOMBA and the email went out after a couple of bad discipline days. I think I was the first one to sign up. It seems that Bea was going to be a sufferer of the Terrible Twos while now Gabe is trying on the Whiny Threes. Gabe you are filling our days with "NO"s and "I don't want to" or "I don't have to". And yes after endless explanations, I have resorted to "Because I said so" and "because Mummy asked you to". Bea, for the most part you have gotten more reasonable but have stuck to the 'go big or go home' way of life and when you are going to have a temper tantrum you go all out. You are stubborn and ballsy and stand your ground. I know I have said it before, but no matter how challenging this is to discipline, I wouldn't want my girl to be any other way. 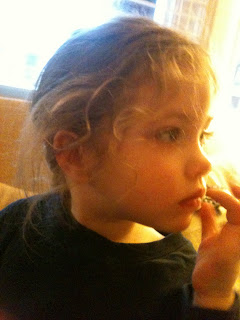 Both of you have said some really funny stuff this month
While changing Gabe's poopy bum I reminded him that he needs to start pooping in the potty. His reply "no not yet, maybe later"

I was out having dinner with Christopher when I received a panicked text from Daddy asking me "Do you know where the fucking carrot is?" to which I replied "no look under the bed". He was then happy to report "never mind she settled for pear" Bea you are still sleeping with that stuffed carrot!! 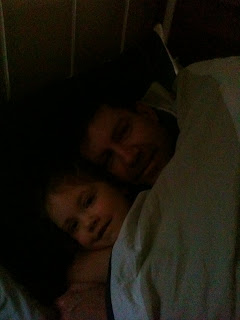 The Wonderful World according to Gabe on why he has to take Jessie's (from Toy Story) hat with them to bed "No Mummy, Jessie seeps wiff her hat on cause she havt to but no boots cause day are noisy" 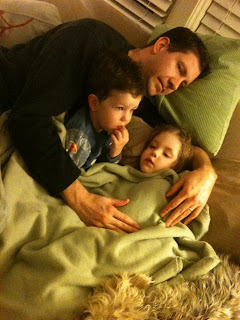 Christmas came and went with any big incident. You both enjoyed ripping the presents open more then the presents themselves. There were a couple of big hits...for Gabe, a Buzz Lightyear doll, more train stuff, and a bamboo airplane. For Bea, art supplies, a Critter clinic, and a bag of small dinosaurs. One of the best parts of Christmas was all the playdates. Even with the age differences with your cousins, the differences seem smaller the older you guys get. We spent one morning with Lily at the farm sledding. Gabe and Lily are great friends and run around holding hands and trashing rooms. We also learned hhow to play Snakes and Ladders....although you both struggle with being able to focus for a full game. 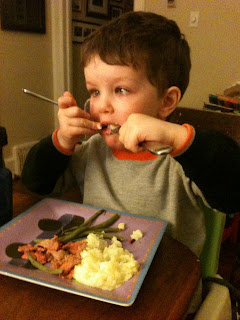 We also had a fun afternoon with Logan at Krissy and Matt's new house. He has a 'toy room' which was a novelty. This time it was Logan and Bea that ran around holding hands and making up games. He also had a ton of battery operated toys that were loud and moved. Most of them scared the crap out of the two of you. I was kinda glad that neither of you were really into them. I just can't imagine having a bunch of loud stuff in the house. It makes me stressed out.

One of the things that I love about Christmas and the holidays is all the time that the two of you get to spend with other family. It seems that many bad habits end (and others start) after family time. All you need is Grammy, Papa, or Amy to tell you how naughty something is and it pretty much stops. If I say it is naughty it almost re-enforces the behavior......a defined limit to push and challenge.

This New Years was another tame one for us. Just the way I like it. We had Lindsay staying with us and invited Dana, Trevor and Oliver over for the festivities. The three kids tore the house apart, had entirely too much fun crashing around till 10, which is super late for you guys. We had a kiddie New Years toast at around 9 with sparking juice.

We have so much to look forward to as a family in the coming year. A big move closer to grandparents that you both love and will want to be involved with you two regularly. The beginning of school in the fall. And Daddy and I are still talking about having another baby. I am taking more courses and getting ready for starting back into working. I am really excited about our future and I can't wait to share it with you two. 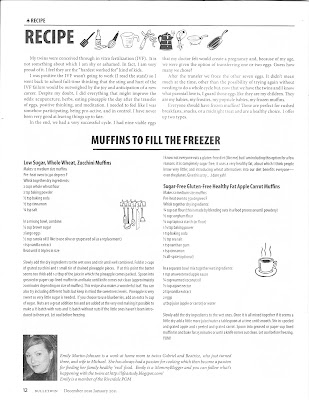