Another month of craziness and time just seems to fly by. I have always hated winter, the short days and constant darkness ...they always felt like they lasted for years but this year winter is flying by. Yes we have spent the last few months in and out of colds and in fact this month have been hit the hardest with all four of us getting smacked down at the end of January. We are still climbing out of that hole with coughs and runny noses. I thought that Bedo might have an ear infection (and maybe you do) but I think we caught it early enough to be able to treat it without antibiotics which I am thankful for. This means that at almost two and a half neither of you have ever taken an antibiotic which I am happy for.

I am sorry to say that this wasn't a great month. It started out great with the start of our Wednesday play groups, a week long visit from Aunty MaryJean and a visit from Pandy and Gruth. But ended with a long hard visit to Pakenham and colds. 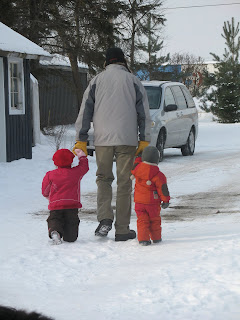 We are lucky that Mary Jean comes to visit for a week twice a year. Her winter visit is usually in January and I always really enjoy it. It is always after the exhaustion of Christmas has worn off and the cabin fever of winter starts to set in. She is crazy about you guys and up to play which you guys love.

Pandy and Gruth came to celebrate Christmas with a little stash of prezzies. It is also funny the way Bedo gravitates to Gampa Andy and Gabe to Nana Ruth. They took tons of pictures and videos and you guys charmed them. We are going to try to get out to visit them soon. I wish you guys could spend more time with them. 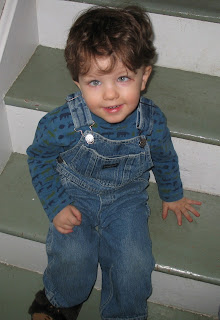 We had a great time at the first class and I think it was the first time that I became really aware of the trouble and problems that Gabe's eye sight might be having on his life. Gabe as time goes by it is obvious that you are using one eye at a time and it looks less and less like you are able to look through both at the same time. This lack of depth perception isn't obvious at home where you know where everything is but really obvious when we are playing at other peoples houses or in play group. You ran around like the other kids but also crashed into them a lot and slowed down before all the floor mats and very tentatively stepped on them unsure of there height and distance.

We go and see the specialists at Sick Kids every three months but the last time we went they thought that we should start patching your right eye, forcing you to use your left eye more. They felt that you used your right the most and were afraid that you would start loosing sight in your left because of lack of use. After that appointment Daddy and I started watching you closely to see which eyes you use and concluded that you use them equally but never together. We chose not to patch you and see what the eye doctor says next time we go in. I have a feeling we have a minor (but still stressful) eye surgery in our future. 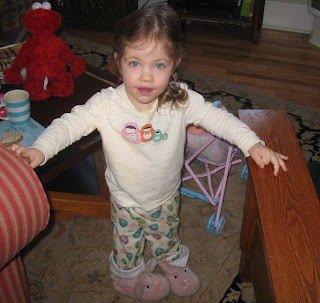 ead. Once we heard what the funeral plans were we packed up and headed east. We left early and you guys traveled great. We knew it was going to be a long stay with Daddy taking off for a 4 day business trip and we would stay in Pakenham. Of course it was the coldest it has been all winter there with minus 35 days so playing outside was out of the question and with neither Grammy or me being drivers we were trapped. You guys were bored and begging to go home by day 4. With Daddy gone and another week to go before heading home I knew we were in trouble. I also became aware of the fact that you guys are getting way too big for the Pack N Plays and that it could be complicated trying to figure out sleeping arrangements for our next trips.

It was the drive home that I knew I was getting sick and by the next day the three of us were sick and it took Daddy a couple of days but we got'em. And here we are trying to get over a crazy month. Eating healthy again, taking our vitamins and thankfully sleeping in our own beds again. One thing that this month and maybe these colds have brought out in the two of you and we love is the cuddles. Both of you want cuddles all the time. 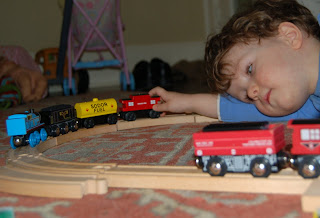 A couple of milestones this month. As of the New Year no more night time water Baba for Gabe. We have known for a while that you were too old for this but it was a way to ensure that you got you kidney homeopathic remedy without questioning whether Bedo drank it. But now at over two we finished up the December meds (you have one month on then 2 months off) and then stopped with the Baba altogether. The only way we could make this ok is if you could take a truck to bed with you. You started out with a 'sleep bus', the same bus every night but as January passed you started to ask to take different trucks to bed with you. Tonight you sleep soundly with your arm wrapped around a pretty large Thomas the Tank Engine you got for Christmas. Bea also gave up the coveted 'nother Nuk' for the New Year going down to one Nuk in bed at night. Maybe after these colds are over we will say goodbye to Nuks altogether. And then my babies will officially no longer be babies. 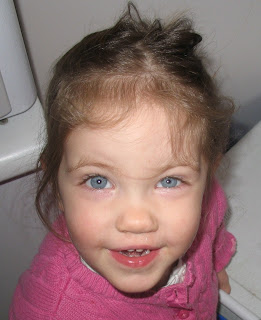 Bedo I think you are going to be our triple threat. Lately you have been breaking into song and singing to yourself, sometimes songs we can recognize like Wheels on the Bus, the theme songs Backyardigans or Olivia but sometimes it is something that you are making up which is always fun to hear. You have now paired this with dancing, mostly twirling in circles but sometimes an occasional jump at the important parts of the song.