Dear Bea and Gabe, aka Beas and Gabes, Cups and Little Man, B Z (your hip hop name) and Geeeeb, lovey and little...

Every month that rolls by I cant believe another month has rolled by. And I can't believe how much more I like them everytime. OK THIS one was my favorite!! We are now 22 months old and getting close to being TWO!!! How did that happen?? The first year of your lives was the longest year of my life. Filled with unbelievable quantities of stress, panic, worry and lack of sleep. But the second year has been very joy filled and has flown by.

This month was filled with huge changes. One of our parent friends (I cant remember who, Susan maybe) said that once kids start talking you can't believe how fast the words come, and they were right. Here is just some of it

The amazing thing about this list is how much you can communicate with a limited list, how much you can say. Just yesterday you were snacking on green beans and Gabe pulled one out of the bowl and announced "one bean" or when I asked why you were crying and upset, "Baba toe ouchie" I had heard a small bang but you explained that your sippy had fallen off the table and landed on your toe.......really the best part of this story is that Bea started kissing your toes, asking after each kiss and pointing to the toe she had just kissed "ouchie toe?"

The physical changes have been amazing too. In the last month the two of you have gotten so brave and sure of yourselves at the local park I take you to that I can sit back and watch you run around like manics. Bea you have always loved the slide and for a while now you spend most of your park time going up and down the slide (if you aren't in the swing) 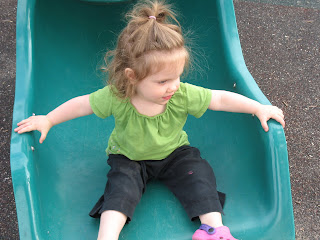 but just yesterday you started throwing yourself down it head first. It surprised me at first and Grammy who was there with us said you had done it a few time already that day. WOW!! 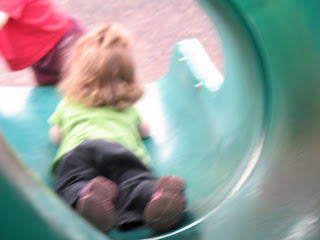 Gabe saw how much fun you were having and although not a huge fan of the slide gave it a try too and he liked it a lot too. 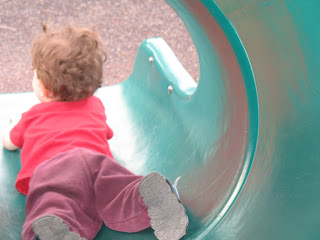 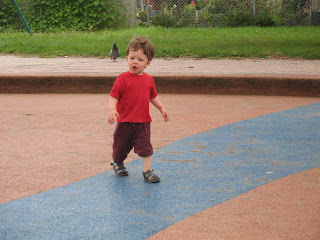 but Gabe really your favorite thing to do there is running around the empty wading pool yelling.

This month we made two trips to visit Grandparents. First an over night to Gramma and Grandy's in Stratford. We spent time running around in their local park, picking and eating peas, playing with sidewalk chalk, and playing with cousin Max's toys....oh and drinkin beers.. 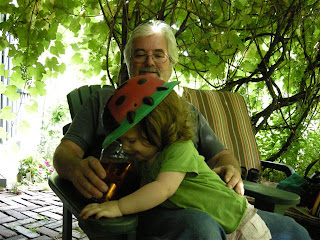 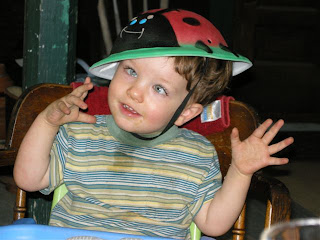 And another trip out to Pakenham for a week long vacation with Grammy and Papa G. You guys really love it there and find a million rotten things to get up to....most of them involve being naked 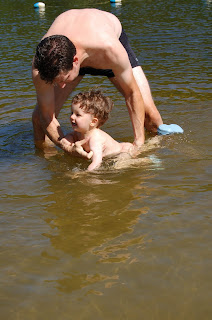 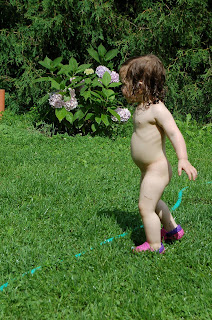 This month we also had your 20 month (corrected age) developmental testing. This is a series of follow-up appointments at Sick Kids to make sure that your premie status isn't delaying any of your development. The doctor seemed pleased with everything and the big news was a week later when we got a copy of the letter they sent to your doctor. The letter said that you are both a good height and weight (with Gabe being a little tall for his age) with slightly large heads (geez I wonder who you got that from?) You are both right on track developmentally but are way ahead verbally!!! WEeeeeeee!! Smartest babies ever!!! One of the recommendations that they had were drawing toys, so we went and got a magna doodle and an aqua doodle, both of which you love but the real prize are the tub crayons (mostly with Gabe) 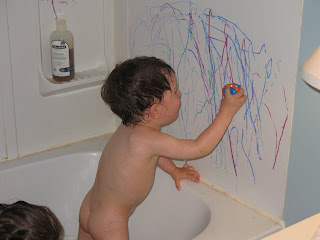 and the bubble machine (mostly with Bea) 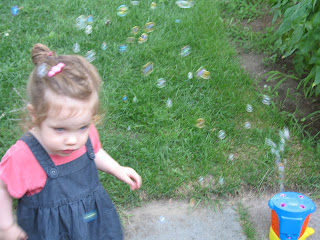 None of the pictures show the dancing you were doing....you actually look really serious in all of them.

I love you guys more all the time
Mama
Posted by Emily Grace at 13:58