Today you turn 15 months old. This has been exhausting month. As soon as we got back from Grammy's and Papa G's house for Christmas it became obvious that Gabe wasn't into two naps a day anymore. One of the sleep books I read said that by 15 months 85% of babies are down to one nap a day so I was expecting this. The problem was that Bea was still enjoying the two naps although I could tell that was going to be short lived because those two naps were getting shorter and shorter. For a couple of days I had it so Bea was on the old schedule and I delayed the morning nap for Gabe for as long as I could. And then at the end of the day Gabe would be ready for bed at least an hour before Bea. This worked great for you guys but awful for me. I had one of you awake and needing a playmate all day. I know this sounds selfish but I need your naps. It gives me time to make your next meal and shower or feed myself. So after a couple of days of this and email help from the other TPOMBA moms I decided to get you both on the one nap a day schedule. It actually went alot easier than I thought it would. Every day we waited a bit longer before putting you down and eventually got it to 11 am which is where it is now. You both sleep anywhere from an hour and a half to three hours, usually around two. We have had to move up bed time for the time being to 6 but you both seem to have adjusted well. 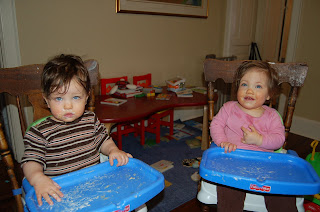 Neither of you are walking yet which is so strange to me. You are both so close and take steps on your own regularly. You will both have brave days where you will let go of things and take a couple of tentitive steps but all you need is one fall and we are back to the safe crawl. I really think you guys have had the longest crawl stage of all babies ever. 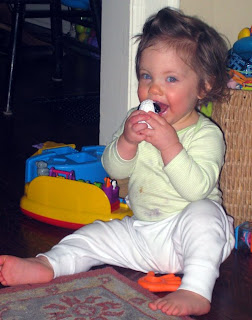 Some of the big changes this month, Bea kisses everything. Real kisses now, not just open mouth attackes. Today I found you giggling in the corner and when I checked on what you were doing, you were kissing your dolly and then laughing about it. I realized that we are always laughing when we shower you guys with kisses so why wouldn't you assume this is what to do. You did improv when you started to chew on dollys feet thou. Bea you are now saying "doggy' and pointing at Gertie. You both launch yourselves out of your highchairs into waiting arms. Gabe says 'up' for up, down and out but we seem to know which you mean. You have also figured out that 'light' means all lights not just the one on the diningroom ceiling. The talking!! Endless talking for both of you. Both of you are now able to climb up on the couch unassisted. You both call your sippy cup of juice 'bubba'. Both of you have some crazy game you play with the dog which only the three of you understand and if I try to join you all stop and look at me like I am interupting but it looks like fun. Bea stopped playing shy and flirted shamelessly with Grampa Andy when he came to visit last week. Oh so many new things.... 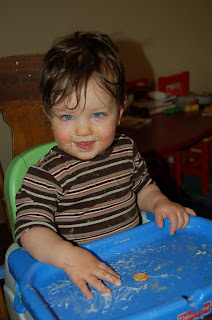 We are trying very hard to ween you guys. This seems to be a harder thing to ask of Gabe then Bea but I have heard that it is often harder for boys. Bea will often go down for naps without of sip from your bottle but Gabe, it better be warm and full!! We have been watering down the formula and it is practically water now but sometimes it doesn't work and we are back to square one and you're awake. I am also not in a big hurry to get you off you bed time drink, the last kidney check up on you we had came back that you were a little dehydrated and I know this is because you are so use to you main fluid intake to be in bed and we have been making those bottles smaller and smaller. Daddy and I are now trying to pack you full of water and juice during the day.
The last few night have been brutal, Gabe you have a cold and are having a very hard time staying asleep and although Bea you appears to not have it, you have woken up a couple of times screaming including the night that Grammy was babysitting so we could go out. Bea you can sleep through Gabe's fussying but if Bea makes any noise at all it wakes up Gabe. Daddy and I haven't been sleeping well in fear of the next wake up. It reminds me of when you guys were tiny. Both of you have had many trips back downstairs for cuddles and a new bottle made. This is VERY unusual, both of you are great sleepers generally.
One thing that has come up this month that might actually happen. Dad and I have been talking seriously about moving out of the city. I never thought in a million years that I would want to be a country bumpkin but after having you guys, I want to offer you the best, healthiest, safest start in life and I just don't see that happening here in the city. We would also like to have more family around and by moving closer to Grammy and Papa G you guys would have daily doses of the clan. The way we look at it, if in two years we decide it isn't for us, we could always move back just in time for you two to start school!
Mama
Posted by Emily Grace at 19:18 No comments: