Yesterday you turned 14 months old. And I know that I say it EVERY month but this was my favorite. Everything just keeps getting to be more and more fun every day. I think this month you two grew the most and learned the most new stuff.

Until now Gabe, you have been the more physical one and we have been waiting for you to let go and start walking. You have been so close so many times and you have been walking holding on to things for ages. Bea you had been behind in crawling, standing and walking until recently. Now suddenly I think Bea is going to be the first off to the races. You have taken a couple of tottling steps before smashing into whatever you were walking towards and you find it easier to walk with us holding your hands or with a walker roller than Gabe does. Gabe I think it has more to do with being impatient and knowing that you can crawl there faster than this walking thing. 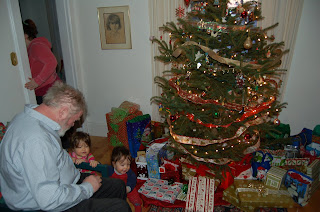 Another thing that has completely flip flopped is the talking. Bea was the blabber, pointing and saying your version of "What's that?". In the last month, Gabe your vocabulary has taken off. You point to the apple in one of your books and have gone from "ap" to "apple" this month. We can ask you where the apple is and you will search through the pages to the green page and point to the apple. I have been trying to teach you "peas" which are right beside the apple on the page and I think that is starting to set in now too. You have also been obsessed with lights which is interesting because it is the same thing that I continually pointed at as a baby and light was my first word. I said it exactly like how you say it which is "ighth". The BEST part of your talking Gabe is that you whisper everything which I have to say makes it ten times cuter. 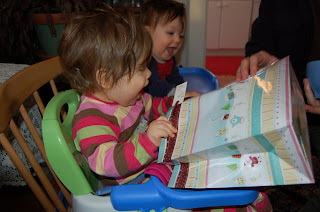 
And I love those faces 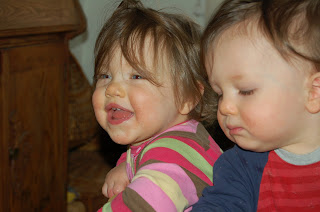 This month was also filled with Bea Bea finding her bellybutton and showing you if you ask. Both of you racing up the stairs if given the opportunity, eating 'real food' like homemade mac and cheese, both of you pointing at Daddy when I ask where's Daddy, Gabe becoming unbelievably ticklish, both of you being able to climb down off the couch unassisted, Bea Bea dancing every time any music is playing, Gabe really clapping, and all the sign language!!!..we can do 'more', 'eat', 'all done', 'food' and 'thank you' with 'more' being the most consistent for Bea Bea 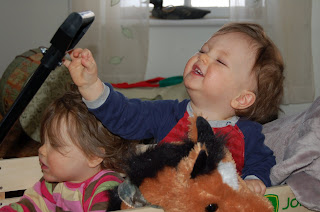 AND to top it all off we have started to potty train, although interrupted by the holidays and we got a couple of pees each and a Bea Bea poop in the potty this month. Now that all the craziness is over we are going back on track. You guys are going to be potty trained before 2 years old if it kills me.
This last month was the first time that Daddy and I started to really consider whether we want to have more babies. You guys are so much fun that it makes me want to have tons of babies. All the moms I know said that they knew when they were done making their families and I don't think Daddy and I are done. We like you that much!!
Mama
Posted by Emily Grace at 13:42