This week you turned 13 months old. This month seemed to go faster than all the rest so I'm not sure how much new stuff there is to tell you.


This was a month of illness and I am tired. First Gabe you got a cold. Mostly in your chest but your nose was bothering you too. You slept great during the day, taking longer naps than usual but would have terrible nights. I think part of the problem was that you were having a had time eating and you would wake up hungry. Dad and I had a few terrible nights trying to get you through. Just when I was starting to worry and think that maybe we have to take you to the doctor, you started getting better.


We went to some lengths in the first couple of days to avoid Bea getting what you had. We would feed you out of separate bowls and make sure that your sippy cups never got mixed up but it is impossible in 'the house whose contents must go in your mouth.' Just when Gabe was all better but a mild cough I could see it hitting Bea. 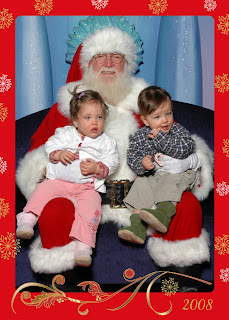 Bea, my little girl, you went from getting a cold to deathly ill in a matter of hours. By the end of the day I could tell something wasn't right. You were tired and Dad put you to bed early while I was out at a doctors appointment. I went to check on you later and you weren't sleeping, you were just laying there which was scary. You had a fever and were obviously having a hard time breathing. I brought you downstairs to have a look at you and maybe give you some Tylenol and I could tell it wasn't ok. Dad was at hockey but Gramma Robin was visiting and we decided to call the health advice line. After a very brief conversation with them which involved them counting your breaths in 15 seconds, they told me to take you to emergency. I called Dad and he came racing home and off to Sick Kids we went. We spent the night there with you in an oxygen mask on filled with steroids. I could tell you were feeling better by dawn because you started to fight back. You were ripping the masks off and frustrated by the heart monitor wires. I was so tired after pulling an all nighter in emerg but loved seeing you get fight back. I knew then that you were going to be ok.

Dad and I came home in a daze. We put you to bed and tried to get some sleep ourselves but we knew Gabe would be up any minute. Luckily Gramma said she would get up with him and take care of breakfast. I had a hard time sleeping. I haven't been that scared since you guys were born. I could hear Gramma downstairs playing with Gabe and before I could sleep I had to go and hold each of you tight. Every month I tell you guys how much I love you and what a gift you are and it is just as true this month as any month but I need to tell you that I like you both...alot! and I really like having you around. And stop scaring me!!

ps. The Santa picture was taken the day before Bea got sick..... Beez, you were terrifed of Santa and this was the only picture that you weren't screaming, it was taken on the inhale. Maybe it wasn't Santa, maybe you just didn't feel well?
Posted by Emily Grace at 13:02