Although I haven't left a lot of details of the stresses of the past few couple of months I have left small morsels to whet the pallet if misery is the company you seek. But to brighten your day really things are ok and we are actually looking towards more sleep and some modicum of sanity again. The only real fear at this point is that on February 1st we have a follow up appointment with general surgery at Sick Kids to schedule the next and final (fingers crossed) procedure for Gabe. I am sooooo excited about this appointment!! To finally get this all over with and have a regular normal baby again brings me unending peace and joy. Getting through the procedure itself will be very stressful, he will be in the hospital for 4 or 5 days and will have to go without food for a couple of those....if you can imagine the nightmare of NOT feeding you 3 month old for a couple of days. Not to mention trying to spend time at the hospital when you have another infant to deal with. I don't want to expose Bea to the germs and illnesses you can catch at a hospital while visiting her brother. I guess there is no point in getting too worried about it until I actually know whats going on.


BUT thats not all. To add insult to injury we had yet another HUGE stress this month. The dear love of my life went and TOTALLED the car. Yes, he turned it into a mass of bent metal and walked away pretty much uninjured, thank god (small 'g' because really, it was the airbags that 'saved' him) . 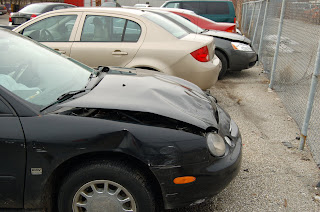 I can't pass the drivers test but some stupid tart pulled out in front of him without looking, making a left. Dear husband smashed into her drivers side door crumpling the door around her and trapping her in the car. Lucky the door had only crumpled around her clothing and has missed flesh. They should've left her there and made her fend for herself, trying to tear and remove the clothing with her stupid teeth but this is a major city and they need their roadways. Besides her husband was in the car too and probably would've complained. The point of this story is that we have had to go car shopping with the smallest of small insurance paid for rentals that doesn't fit car seats. My darling husband is tall enough that he just barely fit in the car without removing the drivers seat and driving from the back seat so the idea of cramming two huge infant carseats in too was out of the question. So almost a full week of lost wages later and shopping around we are now the very cool owners of a MINIVAN!!! The sexy beast that the father of my children is, he just kicked it up a notch by driving a MPV with two car seats in it. Too bad for you ladies, he's taken!!
Posted by Emily Grace at 18:53